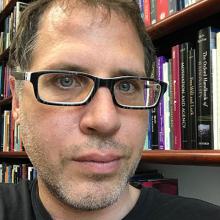 I joined Rice's Philosophy Department in the summer of 2015. My work is primarily in the philosophy of mind (desire, mental representation, concepts, consciousness) and in moral psychology (desire, addiction, moral responsibility, deliberation).

I wrote a dissertation on the nature of mental representation at Stanford University under Fred Dretske, way back in 1998. But those ideas didn't go far, and so I turned to thinking about the nature of desire (wants, wishes) from a similarly naturalistic starting point. Now I'm the author of a book on the nature of desire, Three Faces of Desire (2004: Oxford University Press), of which I am more than reasonably proud. More reasonable is being proud of the book Nomy Arpaly and I recently published, titled In Praise of Desire (2014: OUP). It's on acting for reasons, desiring, and virtue, mainly, and to a lesser extent on deliberation, inner struggle, addiction, love, care, thinking for reasons, pleasure, moral ignorance, and the souls of people who play violent video games. That book puts together my work on desire with Nomy's work on praise- and blameworthiness, and the result is, I hope, pretty darn neat. These days, I've returned to a long-stalled book project tentatively titled Reasons from Atoms, the goal of which is to explain the (low-level) neuroscience of action to philosophers, and propose some interpretations of that neuroscience.

As a teacher, I can typically be found teaching Introduction to Philosophy, Philosophy of Mind, and graduate seminars on consciousness, rationality, and related topics.